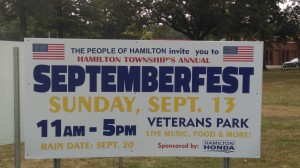 On my hit list for many years has been what observers in other towns have called “vanity signs,” and what I call “uncompensated political advertising.” I’m referring to the practice of politicians seizing every opportunity, on every public notice, to insert their names and implicitly take credit for whatever’s going on around them.

I live in Hamilton, and that’s where I’ve been able to witness the growth of this phenomenon firsthand. Former Mayors Glen Gilmore and John Bencivengo put their names on signs, too, but our current mayor seems to have perfected the practice, resulting in more gratuitous name placements than a Kardashian in a supermarket tabloid. 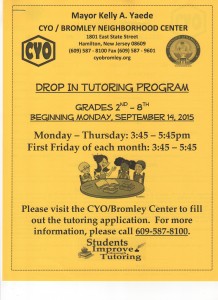 A “Drop-In Tutoring Program” flyer for grade schoolers at the CYO/Bromley Neighborhood Center features Yaede’s name before the name of the center itself, giving the distinct, though mistaken impression that the building was named after her. That flyer’s font size wasn’t quite big enough for the mayor, apparently, because a couple of other flyers, including one for free flu shots, doubled the size of her name. The size of the center’s name did not increase.

A sign I saw recently in the Hamilton Free Public Library advertising the Hamilton Golf Center featured Mayor Yaede’s name, but just in case anyone out to play golf didn’t stop by the library for a quick read first, her name also appears on the Golf Center’s front door. 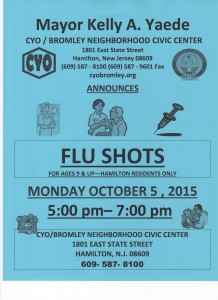 On another sign, the mayor announced a summer reading program for kids—in conjunction with the Hamilton Library, which gets lower billing. And, based on placement and comparative font size, the list of “Hamilton Recreations Summer Camp Offerings 2015” wasn’t as important as the fact that “MAYOR KELLY A. YAEDE” announced it.

This is not merely a local phenomenon. In 2013, Boston Magazine attempted to count how many signs bore the name of then-Mayor Thomas M. Menino and gave up at 1,182. All of those signs, incidentally, needed to be removed or replaced the next year when a new mayor was elected. A Boston City Councilor At-Large called for 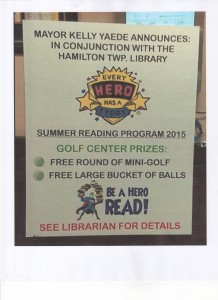 Menino to use $414,000 in unspent campaign money to change the signs, but Menino’s spokesperson said they weren’t even considering the suggestion. In Akron, Ohio, and Washington, D.C., journalists and citizens have also complained about the cost and questionable ethics of these “vanity signs.”

So Mayor Yaede was not the originator of this practice. But she does seem to be the most egregious offender I can recall during my time in Hamilton.

Being mayor comes with a set of responsibilities, including overseeing programs and events; in other words, it’s part of the job. Imagine working in an office and preparing a spreadsheet for your boss with your own name in big, bold letters at the top of it, or fixing a pothole and leaving a large “repaired by” sign with your name, and you get some idea of how ridiculous this practice is. 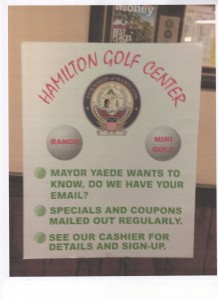 Hamilton taxpayers (and the occasional corporate sponsors) pay for Septemberfest, the Fall Harvest Festival, Winter Wonderland, and all of the other township-run programs and events. Instead of allowing elected officials to publicly congratulate themselves for inviting us to the events we pay for, how about changing those signs and flyers to read “THE PEOPLE OF HAMILTON”? The photo above gives you an idea of what I have in mind.

My wife, Amy Inman, knowing this has been a pet peeve of mine for some time and sick of hearing me complain about it, has promised that if elected mayor this November, she’ll end the practice of slapping the mayor’s name on every sign and flyer in town. 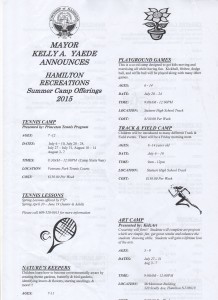 In the meantime, I have to thank the current mayor for inspiring me to write about this. In a very real sense, this essay was brought to you by Mayor Kelly A. Yaede.

Peter Dabbene will be at the East Coast Comicon (http://eastcoastcomicon.com) at the Meadowlands, New Jersey, April 11th and 12th, selling and signing copies of ARK and Robin Hood. Stop by and say hello!

Two new poems, “Scratching” and “The Trials of Iphicles” are viewable at:
http://www.pyrokinection.com/2014/03/two-poems-by-peter-dabbene.html